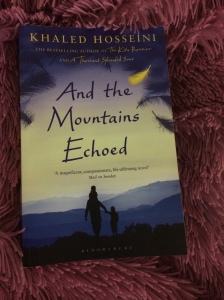 Could I just say WOW, WOW ! It has been awhile since I have read such a wonderful, touching story ! The novel is written by Khaled Hosseini and, hence, no wonder the story is so captivating ! Like his other two novel,  The Kite Runner and  A Thousand Splendid Suns, this book comes above all “my” expectations.

The story is full of characters whose lives are intertwined, and it spans across continents and history. The story starts in 1952 with a simple, poor Afghan farmer, the father of Abdullah and Pari, as he tells his children a bedtime story about a man who lost his dearest son after a monster kidnapped him. The bedtime story then explains how the father learns to forget and proceed with his life without his son. Thus this story sets the whole novel into motion. We know from the beginning that  it is not only about love , but about loss and separation, too.

The novel is full of symbols. The title itself  And the mountains echoed , for example , is symbolic: every single deed and its consequences will be echoed. I think also Hosseini’s introduction of the feather which Pari used to collect with her brother is significant. In a passage, Hosseini writes: “He would picture the feather coming loose from the bird, up in the clouds, half a mile above the world, twirling and spinning in violent currents, hurled by gusts of blustering wind across miles and miles of desert and mountains, to finally land, of all places and against all odds, at the foot of that one boulder for his sister to find.”

This passage reminds me of Yeats’s “The Second Coming,” wherein Yeats writes,

In this poem, Yeats suggests that all civilizations are doomed to fall, and out of them other civilizations spring. Thus the action is turning above, as an indication of continuity. On the other hand, I believe Hosseini alludes to Yeats’s image to suggest the opposite. Out of loss “the bird’s loss of its feather” there will result more loss and separation.

Further, as I mentioned above, the story itself starts with a story and the main story is full of overlapping, intertwined stories. And the Mountains echoed  hence becomes a representative of Afghan storytelling. Hosseini’s novel appeals not only to Afghan, but to all readers, especially those cherished storytelling. In his tale, Hosseini explores every single corner of his characters, and maintains in the same time an air of suspense and surprise.! The tale is also a victory of characters. There is no main or supporting characters; almost all characters are given the chance to voice their stories. * Though the stories of Roshi and the two Afghan-American cousins are not as satisfactory as the other stories.*

The story tells about how one action may affect many lives. It examines loss and separation, but never forgets to explore the mighty ocean of love: the love between siblings, and the love between parents and children. Despite all miseries which face all the characters they find within themselves seeds of love. They strive to find and give tenderness to those around them. The most interesting element in the story- and also the main shared element among all their stories- is the way they handle “The Past.” All of the characters are crippled with the past. All of them couldn’t project their present or even future without being haunted with their past.

If I allow myself , I would write forever on this novel. I’m really fascinated with its overlapping stories. Writing a review which is fair and comprehensive is really difficult. So hopefully those lines will find their way to a reader and encourages her/him to read this novel