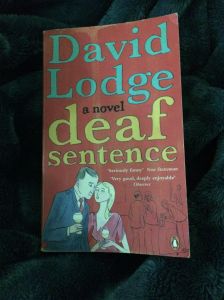 I enjoyed reading this book. The story’s main focus is not the plot, but the witty remarks and observations of its protagonist, Prof. Bates. The protagonist is a down to earth man; his retired lifestyle resembles many of his peers: the happy first months, then the succumbence to the empty sometimes boring routine. The author explores in his story the human relationships in many levels: those of married couples, of friends, of children, of father and son and of professor and their students.

Prof. Bates is a retired linguistic professor which explains his fascination with language and his witty use of it in his remarks and observations. This is also ironic as he loses his hearing in a relatively young age. He cannot enjoy analysing and studying the one thing he loves most. The book is funny; it treats the problems Bates face in a humorous way. One cannot lose interest while reading the book, Bates though a 60 something retired Professor is a charismatic character whose verbal slip up and exasperation attract the reader. Comic misunderstanding enhances the book’s comic tone.

However, despite the comic tone in the novel, the story carries along a deep melancholic message wherein it shows the littleness of life. It enlightens the fact that in the course of our lives we will understand that our problems and worries are trivial when compared to others’ problems and worries: Prof. Bates contemplates how deafness is easier than blindness; his loneliness is nothing to be compared to his father.

It is interesting to read about the cruelties of comedy. David Lodge, a Professor of English Literature, makes  me really admire my fellow linguists:) Deaf sentence is a dark comedy of ageing and bodily decay, totally recommended