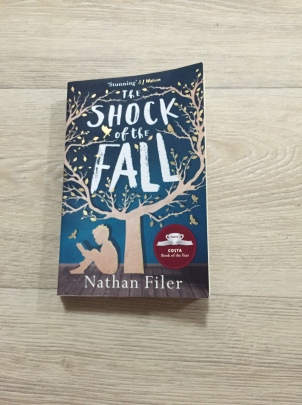 The book is a story about a man who descends into mental illness following the death of his little brother. Overall the story is compelling as it presents the heartbreaking ramifications of grief, madness and loss. Even after finishing the book, it stays with me for a long time. The book gives a realistic portrayal of a mentally ill character. I think this ability to present such an authentic character stems from the fact that the writer himself, Nathan Filer, originally trained and worked as a mental health nurse, then later as a mental health researcher at the University.

Mathew is unforgettable character. Even when his life was falling apart, he was still charismatic. The book’s narration is fragmented mirroring Mathew’s fragmented mind. There is also a repetition of some conversations, as Mathew himself does not always remember what is going around him. He is in grief and in a great distress; and on top of that he mostly suffers from loss and sense of guilt. All this makes me contemplating stopping reading the book couple of times, although I enjoyed reading it..but it was too much for me to read over 300 pages about only grief in the mind of one’s character. It just makes me kind of feeling suffocated!

Would I recommend this book to anyone? Yes and No. Yes if you are interested in such kind of books, No if you have no patience to read about a story revolves mainly about mental illness and one character.