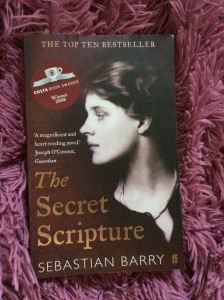 This is one good novel. One of the best drama novels I’ve read this year. The book tells the story of Roseanna, a one-hundred-year-old woman. She now resides in a mental hospital. Roseanna, who seems perfectly healthy compared to her age, writes her life story and keeps it hidden. She refuses to tell her doctors her story, but decided to pin it down, so whoever has it after her death would learn about her true story. Her life entangles with her psychiatrist, Dr. Grene. The hospital will be moved to another place, and Dr. Grene should decide which of his patients should be transferred and which should be released. But being unable to know her story, Dr. Grene couldn’t decide. Thus he decided to discover the truth by investigating her past. He discovered then a shocking fact, she is his mother! Roseanne was a victim to the religious and political upheavals in Ireland in the 1920-30s.

In The Secret Scripture, Barry writes about loss and failed hopes. The plot itself is astonishing. The characters are real, the dialogue is so captivating and the description is so vivid. Barry brings history alive though Rosenna’s story, which she refers to as “Testimony”.

I stopped many times while reading the novel. It is painful to read about how our promises got broken and our hopes got crushed and our dreams fade ! Roseanna was a victim to religious violence and corruption. Barry criticizes religion in his novel and how it is used to deprive people from their simplest rights. She lost everything. And even after she lost everything, they tried to deprive her from her own soul and freedom !. Despite all this, Roseanne seems happy, given the bleakness of her circumstances. She still holds tight to her right to be happy. This is what we all should do.!